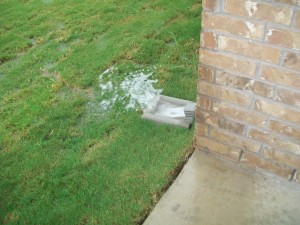 People sometimes ask if we inspect in bad weather. When I answer, I tell them stories. Here are two.
It was one of those rare days last summer when it not only rained – it poured. I was doing a final phase inspection on a newly constructed home. During the inspection the bottom fell out and it rained so hard that the clients and I were stuck in the house. Water was running down the street from curb to curb, like a river. We were talking as I inspected about how badly we needed rain, not just a “gully-washer.”
As we walked into the garage, I noticed two puddles of water. The puddles were on opposite sides of the garage. Each puddle was gathering at the floor, running from behind the sheetrock walls.
Upon entering the attic I found two distinct spots on the bottom side of the roof decking where the rain was coming in, 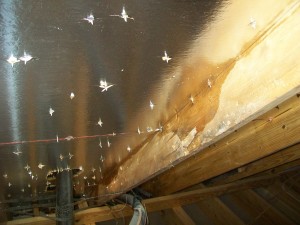 dripping onto the sheetrock below, and running to the walls and below.
The moral of this story is, I would never have located those roof leaks on a dry day, and the home buyers wouldn’t have found them until they were home owners.
Recently, I was inspecting early in the morning after a hard over night rain. What made me think of this article was what I saw outside the home that morning. There was a 10-12 foot wide pool of water standing at the foundation on one side of the house. All along that side of the house, the water was puddling, and not running anywhere. My thought that morning was that the ground actually looked like it would drain pretty well, down the side of the house and off the property. 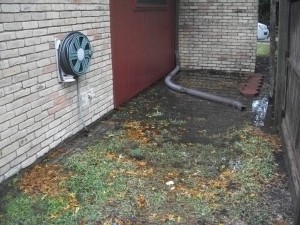 The moral of this story is the same: Though we always check for grading and drainage problems, I would not have suspected that water would stand along the side of that house, unless I had been there after a hard rain.
We inspect in bad weather. We do so, because the inspection schedule doesn’t allow for a whole lot of juggling, but also because we know that when you buy that house, you will be living there in good weather and in bad. And you deserve to know our best opinion. So, give us a call and let us put our hard work to work for you.

Home Inspection Client Asked, “Do You Inspect In the Rain?” March 15th, 2019admin