Text
HOME
Top Menu
Why Do We Report T&P Valve Problems as Deficient in Our Home Inspections? March 15th, 2019admin

Adam and I, as well as other home inspectors, have been criticized for writing up some of the problems related to water heaters. Truth is there are a few deficiencies we find with water heaters that can be downright dangerous. And with this first article in a series, I want to set the record straight!

Water heaters should be properly installed and properly maintained! And if we see those procedures being ignored or shortcuts taken by “do-it-yourselfers,” we will report it that way to our clients. There is a REASON that most municipalities require that a permit be pulled by a licensed plumber.  It is not worth the risk to your family for us to turn a blind eye to these matters.

In this first of a series of posts, we’re going to look at the component that can potentially be the most dangerous — the Temperature and Pressure Relief Valve. It’s commonly called the T&P Valve, or just TPR.

As its title might suggest, the Temperature and Pressure Relief Valve is there for a reason. If you don’t have one on your water heater, you are already risking your family’s safety. If you have one on the unit, but it is not properly installed and properly terminated, 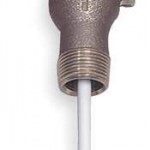 it can also cause problems. On the left is a photo of a Temperature and Pressure Relief Valve (commonly called a T&P valve). The T&P valve has a couple of very important functions. If the water gets too hot inside the tank, it also creates a build up of pressure. When this happens, the valve pops open, lowering the pressure inside, and slightly lowering the temperature as well.

If that valve does not open, you can see that it could be dangerous. If you watch the DIY or History Channel, you may have seen the guys on “MythBusters” blow up a water heater on a wharf by their studio. They were working in a controlled and safe environment. And we presume they knew what they were doing.

If the water heater in your home is unsafe, it becomes a matter of safety for your family. In fact, I have posted a video right here to show you what can happen. I want to say a special thanks to my home inspector colleague Stan Fikel in Phoenix, who posted this video, documenting the damage done by an electric water heater in his own neighborhood. After you finish watching the video and listening to Stan’s description, see if you have a new respect for water heaters.

Now, a missing or defective TPR Valve can cause a lot of damage, but the way the discharge line off the TPR valve is installed, can also be crucially important. If the discharge piping gets clogged or kinked, it can present an obstruction in the line. If the obstruction is significant enough, it will create an obstruction similar to there being no T&P valve at all. Those obstructions occur when there is a kink or bend in the pipe. I’ve seen the end of the pipe bent or twisted at the outside of the house. All these can cause a dangerous stoppage.

And there is one other thing that can cause a clog in this discharge line. 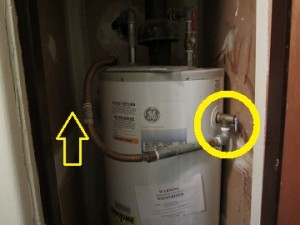 The discharge line is supposed to run downhill all the way to the termination point. These valves actually seep or leak or sputter, letting small amounts of water and vapor out over time. When this happens mineral deposits and corrosion can build up in the line and clog the pipe. The arrows in the photo on the right show that the discharge line actually takes an upward turn as it leaves the TPR valve (circled). While we are inspecting the water heater, we look to make sure that the discharge line runs downhill all the way to the termination point. If the line turns uphill, we write it up as a deficiency and recommend that a licensed plumber make it right.

A consumer information tag comes out of the box, attached to ALL T&P valves sold. Those tags explain that the T&P valve is supposed to be tested at least once a year. No one that I know ever tests the valve, but that doesn’t make it any less of a good idea. It usually takes two people, because the termination point is supposed to be outside. So one person stands ready to lift the valve, and the other person stands at the termination point (but far enough away that they won’t get sprayed with the hot water when it comes out during the test. After the test, re-seat the valve and wait for the water to stop running at the other end.

Now, here is the problem. If no one has ever tested the valve, there is a fairly good chance it will not re-seat, and that hot water will continue to run out. This is an inconvenience, because you will need to call a plumber to fix it, and they charge about $150 or more to replace the valve. BUT, if it is a bad valve anyway, you have just made your family safer. So weigh the benefit against the risk, and make the decision.

Good luck, and we will continue to err on the side of safety when we inspect your home, by reporting these and other deficiencies.

Or you can schedule a home inspection online 24/7.

Why Do We Report T&P Valve Problems as Deficient in Our Home Inspections? March 15th, 2019admin

2 thoughts on “Why Do We Report T&P Valve Problems as Deficient in Our Home Inspections?”